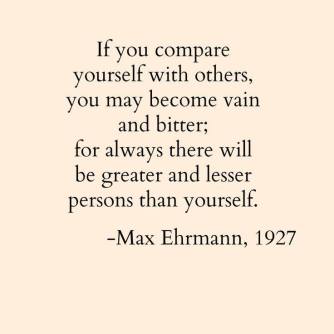 Max Erhmann’s Desiderata is one of my favorite poems, along with almost anything written by Nayyirah Waheed. The nuggets contained in this work of Erhmann’s are plenty.

I watched a short Facebook video yesterday about fashion magazines. The video showed out of hundreds of pages in two popular mags, how over half of each were simply advertising. Advertising that sends the message that you’re not enough, should be thinner, hair should be thicker, makeup should be different, your clothes should be fancier.

I wonder what Erhmann would say about our world today, and about the rampant  comparison that we seem to thrive on. I hear it in my six year old, comparing who sat better in class listening to the teacher. I hear it in my eldest, noting who runs the fastest among his peers. We seem innately bred to rank ourselves and our value in some way, measuring ourselves up against others in the hopes that we come out on top of somebody and can at least then we might feel okay with ourselves.

Comparison is tricky. Because ultimately, we do differ in our capabilities and skills – and naturally there is a sense that some folks are better at certain things, or possess certain qualities that others don’t. Somehow we have to as people be able to notice differences without these things making us more or less worthy than other people.

I think the real danger of comparison comes when we use it as a valuation tool. When we feel better about who we are because we are superior in some capacity to another (whether we’re thinner, make more money, whether our kids are more well behaved, or our car is nicer…), then we are shaming down. We are elevating our sense of value based on a perceived lack in someone else.

This is a gross and really unattractive way to live in the world.

The alternative isn’t much better either. Lots of folks I see in therapy are really proficient at shaming up. What I mean by this is that they look up at others, elevating the others’ accomplishments, successes, qualities, or capacities and in turn they feel like crap about themselves and declare themselves to be less than in comparison to the other who sits on a culturally created pedestal.

Again. This is total crap.

What would it be like if we could notice differences, accomplishments, skills, capabilities, qualities of others, and allow other people to be who they are and us to be who we are without anyone needing to be better or worse than another? What if we could actually celebrate who the other is, and be kind to our insecure selves, and remind ourselves that we too are valuable – even if we have stringy hair, a low paying job, and crazy kids?

When my babies were small and growing into toddlers, I often made a point of highlighting their good qualities – and also their crummy ones. My eldest had pretty terrible body control and wasn’t a great climber for a good part of his younger years. He knew that. And it was no big deal. My youngest knew (and still knows!) that she is a terrible cleaner upper. The little tornado leaves stuff everywhere, and we can talk about it openly – without each kid trying to one up each other and feel better about themselves by stepping on the other. And yes…sometimes they try to…but any quip where shame up or down comes into play is quickly me with a line that is firmly, oh so firmly, entrenched in the brains of my children…you can’t be good at everything. But you are always good. Always enough. Always special. Nothing anyone else does, or anything you can’t do doesn’t change that.

So as we walk into a season that can be fraught with comparison, let’s hold that in mind. Let the other be the other. Maybe someone’s house is perfectly decorated, gifts neatly wrapped, cookies freshly baked. And maybe you went to Costco for a giant pack of pre-made cookies and your gifts are tossed in reused gift bags.

You can’t be good at everything.

Hooray for them. Hooray for you. Go be you. Love your people. Drink your coffee and get on with it…keep an ear to the ground for shame up and shame down, and kick it to the curb when it shows up.

You are okay. We are okay. And we are all good enough.

If there's a topic or question you'd like to see addressed on the blog, , send us a message here. We'd love to hear from you.
Join 48 other subscribers
Follow Winnipeg Counselling on WordPress.com

Please note that Sabrina's caseload is currently at capacity. You may find a list of alternative service providers on the booking page.

Looking to BOOK a therapy session? You can do so anytime using our convenient online booking feature. Click the link to find available appointment times.

We acknowledge that Bloom operates on ancestral lands, with our office located on the traditional territory of the Anishinaabe, Cree, Oji-Cree, Dakota, and Dene Peoples, and on the homeland of the Métis Nation. Bloom is commited to pursuing justice, equity, reconiliation, and to partcipating in the work of decolonization.